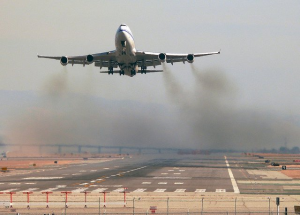 More and more earth scientists, climate scientists, and geographers, are #flyingless. Many believe that in the Anthropocene, with climate change wreaking havoc around the world, it is important to align one’s daily life choices with our views and research that require taking responsibility and raising awareness. Actions speak louder than words.

I have always avoided flying when there was an easy alternative, for example a quick and hassle-free train journey (direct train from the Netherlands to many cities in Germany, Belgium, & France). I did this partly for environmental reasons, partly because I like travelling by train much more (you can read a book, do some work, and have a better feel for the distance you travel). Recently, I realised that I was still flying quite a lot, especially after moving from the Netherlands to the UK where train travel to places in Europe for conferences and meetings is just that bit more complicated because you have to cross the Channel, which means changing trains, train companies and even stations a few times.

As I couldn’t convince myself why I was not taking the train when the journey would be a tad longer or more cumbersome, I decided I would up my efforts of finding alternatives for flying to meetings or conferences within Europe. I have since used trains, ferries and cars more often, and found out that the extra time is not a problem for me and the extra hassle isn’t as bad as I thought it would be. I still fly to project fieldwork in Africa or Latin America, but also try to reduce flying to other continents only for meetings and use video-conferencing instead. I think a combined effort is needed, including personal changes, institutional changes, and (inter)national policy changes. I think sharing experiences about #flyingless is an important step.

For more information, and joining the #flyingless movement, go to: https://noflyclimatesci.org/.

Excited for my European travel by train this year! Booked train journeys to Vienna for @EuroGeosciences, to Zurich to visit @Hydrology_WSL and to Wageningen to visit @dr_firelady and other @WUR colleagues. With @Eurostar @NS_online @DB_Bahn and discovering @Interrail. #flyingless