Recently, two papers have been published from the work done in the NWO-funded project “Adding the Human Dimension to Drought”. Sally Rangecroft and Anne Van Loon developed the methodology to quantify how human activities influence drought based on observation data. It is a challenge to attribute droughts in streamflow to the variety of natural drivers (low rainfall, high evaporation, anomalies in temperature) and human factors (abstraction, water storage). But this challenge is important to address, as shown in a recent drought event in Australia, where rivers ran dry due to a combination of factors:

“Government ministers blamed the drought that set in across eastern Australia from April 2017. The deputy prime minister, Michael McCormack, said the environmental disaster was down to the fact it “just hasn’t rained”. But Indigenous and environmental groups argue that expanding irrigation in some of Australia’s driest regions has reduced the Darling and its tributaries to a series of muddy pools.  “We have witnessed a catastrophic failure of Australia’s supposedly world-leading water management system,” Rene Woods, from the Murray Lower Darling Rivers Indigenous Nations says.” 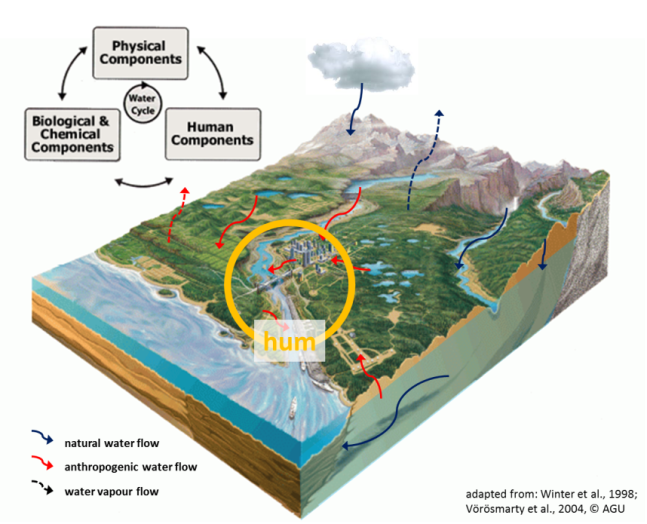 Figure 1: A catchment (“hum”) influenced by human activities for which we have streamflow observations and we want to quantify how much of the droughts are caused by natural and how much by human drivers.

The paper “Using paired catchments to quantify the human influence on hydrological droughts” published in HESS shows that we could use a classic method in hydrology, the “paired catchment” method, which was developed in the 1920s for assessing the impact of land cover treatment on water quantity and quality. In this method, the human-influenced catchment needs to be paired with a “benchmark” catchment that is similar in all aspects except for the human activity under study (see Figure 2). This method therefore isolates the effect of that specific activity for analysis, allowing us to estimate the change in drought events because of that human activity.

In the paper, we discuss how the selection of this benchmark catchment is crucial and give advice on which factors should be considered in the selection. We also demonstrate the application of the approach to two case studies, one impacted by groundwater abstraction and one with a water transfer from another catchment. Using the paired-catchment method we were able to quantify that the abstraction made droughts 200% longer and more severe, whereas the water transfer made droughts 80% shorter and less severe.

Figure 2: Distinguishing the natural and human drivers of droughts in the “hum” catchment by comparing them to the paired “nat” catchment, which serves as a benchmark.

The paper “An observation-based method to quantify the human influence on hydrological drought: upstream–downstream comparison” published in HSJ (will be Open Access soon, in the meantime use this link for access) uses a similar idea, but instead of the benchmark data being from a different catchment, the benchmark is a natural sub-catchment located upstream of the human activity, therefore unaffected by the human influence we are interested in quantifying (see Figure 3). We demonstrate this approach in a basin in northern Chile, where a reservoir was introduced. The method showed that the reservoir made droughts downstream longer (30%) and more severe (200%), mostly due to a change in the flow regime. A sensitivity analysis showed that methodological choices made during the drought analysis process impact the results substantially. If standardised indices, which are increasingly popular, would be used, the human influence on drought would be underestimated, because the human influence would be included in the drought reference.

Figure 3: Distinguishing the natural and human drivers of droughts in the “hum” catchment by comparing them to the upstream “up” catchment, which serves as a benchmark.

These new approaches are additional to existing methods, for example using a model to naturalise the streamflow of the human-influenced catchment (like in Van Loon & Van Lanen, 2013) or by using large-sample hydrology to find patterns in droughts between natural and human-influenced catchments (like in Tijdeman et al., 2018). We hope that these approaches will be used around the world to support discussions about the drivers of streamflow drought so that suitable management can be designed and situations like the Australian dried up rivers can be avoided.