The EGU week started early for Anne, Danny, Doris, and Lucinda at the annual Panta Rhei day on the Sunday. The Panta Rhei day brings together a range of scientists from the Panta Rhei working groups, with the aim of bringing a human focus to the hydrological sciences. Research group leader Anne Van Loon provided the work of CreativeDrought recent project in South Africa. Not to be deterred by the loss of a projector, Anne went old fashioned to deliver a successful presentation on Drought vulnerability in South Africa by chalk and blackboard. 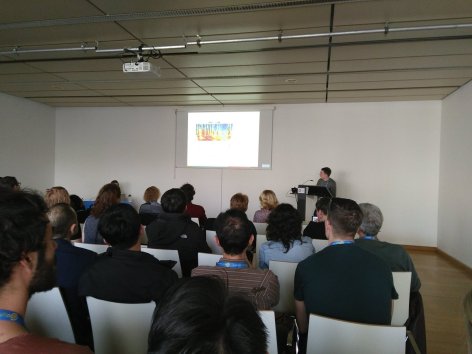 Danny at his oral presentation 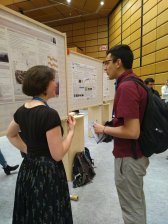 Sally during her 2 minute madness at her PICO

Danny Croghan officially kicked off the week of presentations at EGU proper with his presentation on “High Frequency Dissolved Organic Matter (DOM) dynamics in urban rivers revealed by in-situ fluorometry”. The talk showcased the ability of in-situ fluorometers to unpick high temporal resolution patterns in DOM at both baseflow and storm flow. This was swiftly followed by Sally Rangecroft’s first PICO presentation on the subject of “Observing the human influence on Hydrological Drought”. Sally was kept busy showing her post-doctoral research on identifying and analysing the human impact on drought through case studies. The day was ended by Doris Wendt showing the early stages of her research in her poster presentation on “Examining management interventions on hydrological drought”. 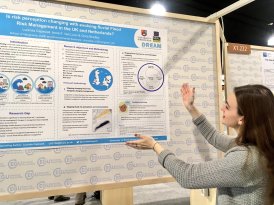 Lucy showing off her poster

Sally presenting in her second PICO

Tuesday saw Sally present her second PICO on “Transdisciplinary approach to drought preparedness and local water management” where she showcased the work of CreativeDrought to a busy session. Lucinda Capewell then presented at her first international conference, with her poster on “Is risk perception changing with evolving fluvial Flood Risk Management practices in the UK and Netherlands” bringing numerous helpful comments and discussions that will help guide her research for the rest of her PhD.

Wednesday began with Colin Manning presenting his soon to be published research (in the Journal of Hydrometeorology) in an oral presentation on “Soil Moisture Drought In Europe: A Compound Event of Precipitation and Potential Evapotranspiration on Multiple Timescales” where he highlighted the importance of taking climate and season into context when using drought indices that incorporate potential evapotranspiration. Anne Van Loon then presented her work on “Bridging scales: comparing the human influence on streamflow drought in global-scale models and catchment scale observations” where she showed occasional discrepancies in catchment scale and global-scale model results due to the human influence on drought. Marit Van Tiel ended the day with her poster presentation on “Variability in glacier hydrographs around the world”, giving an overview of her initial results in comparing glacier hydrographs from around the globe.

Mel Rohse started Thursday with the last of the CreativeDrought projects presentations, with her oral on “Community perception of and preparation to drought: an interdisciplinary case study in rural South Africa” where she presented how the CreativeDrought project sought to bring social science and hydrological modelling together to increase drought preparedness. Marit then presented the groups final PICO of the week, with her topic of “Searching the elusive optimum in the glacier compensation effect”. Marit had plenty of intrigued attendees, showing  them that glacier compensation and streamflow variability theory may not be as straightforward as previously thought. Danny then undertook his second presentation of the week, with his poster entitled “Effects of Precipitation Calculation Method on an Urban Water Temperature Study” where he displayed the substantial impacts choice of precipitation calculation method can have in the analysis of water quality.

To end the week, Anne convened the Hydrological Extremes session, with a full day of talks followed by posters. Doris Wendt gave an insightful talk on “Quantifying feedback processes between abstraction and groundwater droughts” where she displayed the importance of groundwater management in safeguarding groundwater availability. To round off the groups week, Sally presented her former MSc student Joanna Margariti’s poster “Anthropogenic influences on streamflow drought termination”, highlighting the increased duration of the drought termination phase in human modified catchments in Europe.

The research group ended the week by successfully completing the mammoth task of getting all present research group members into the much famed EGU convener’s party, following a successful week of presentations, meetings, and discussions that are sure to help drive the research group over the coming months.